Posted on March 10, 2014 by stretchingittotravel

From our area to the top of Wisconsin is about 10 hours.  The choices were either to drive it all in 1 stretch, spend the night near Bayfield to arrive first thing in the morning. Or leave the night before, break it in half and arrive around noon on Friday.  10 hours is a long time to sit so I voted to break it in half.

I had a Marriott certificate that was going to expire at the end of April, I had earned that over spring break last year.  So I started on the Marriott site looking at a map of their hotel locations.  We settled on the Fairfield Inn and Suites in Oshkosh, Wisconsin.  Close to the highway and free breakfast.   Had we not used the certificate it would have been $129 a night for two queen beds.  Staying there would leave us a 5 hours drive the next morning.

Up bright and early the next day, that hour time difference to central time came in handy.  Its an easy drive, lots of birch and pine trees the whole way.  We ran into some freezing rain, light snow, snow plows, semi trucks and low speed limits from time to time.  Arriving at our destination a little after 12:30 to find that cars were parking a mile or two up the highway from the park entrance.  That adds to the walk a bit!  We wore and highly recommend Yak-Trax. They are about $30 a pair but priceless after walking around on the smooth ice.

The walk on the beach/lake was pretty packed down by people for the most part. If you got out of the path to pass people it had some parts where you sank in the snow a bit.  Still safe but harder to walk in.  For a while we considered leaving our ski poles behind to pick up later, unsure if we really needed them.  Some people towed their kids in sleds, some had their dogs along.  It was a happy group walking the mile from the beach stairs to the first ice cave area.

This is the first ice area you come to: 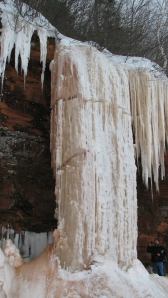 I didn’t realize that the ice was all along the shoreline. I thought we might see 2 or 3 ice caves.  It goes for a couple of miles.  People encouraged others to go into the caves, told you have much room you would have. Kids called to each other to come check out this one!  They would slip into one cave an pop out another on the side.  People took photos for each other, smiled when the kids slide down an ice hill.  It was a fun, festive atmosphere for adults and kids alike! 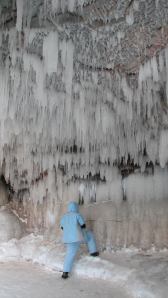 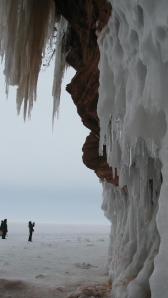 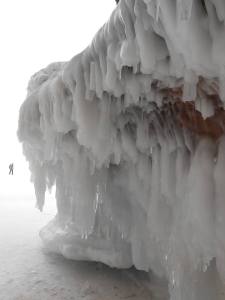 We couldn’t imagine how tall the rocks were or that the colors of the ice would be so vivid!  I loved the blue color of this area! 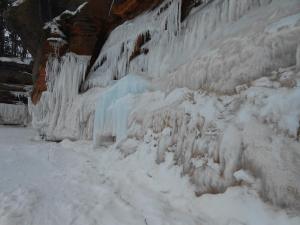 Some were more of a yellow and brown. 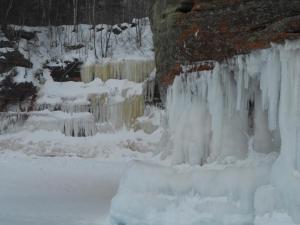 The ski poles came in very handy when you stepped up on the smooth ice next to the rocks.  Even more helpful when it was time to step down. Some places the best way to get down to lake level was to slide on your bottom like the kids.

We spent a little over 3 hours at the Apostle Island Ice Caves.  They did have Porto-johns set up for visitors in the parking lot, and shuttle buses ran from town if people wanted to catch a ride to the cave area.

We drove the 3 and a half hours back down to Wausau, Wisconsin to spend the night before going to Green Bay the next morning.