Posted on April 14, 2014 by stretchingittotravel

After our cruise we spent a few days in the Tampa area. Daughter wanted to swim in the Gulf so we drove from Tampa to Clearwater Beach.  It was about 40 minutes over the causeway to the beach area.  We were able to park the car and get into our room at the  Clearwater Beach Travelodge right away.  We changed into our swim suits and headed across the street to the Gulf.

We walked up the beach to the pier and watched someone land a huge cow ray.  I think we watched almost an hour as he struggled with the fishing pole and finally brought up the huge ray.

Our hotel was across the street from the beach, a quick 30 second walk was all it took to hit the sand. I can walk a little to save over $100 a night on the hotel. And with nothing built in front of the hotel we had great beach views from the rooms.  The hotel is old but clean. And it has a pool in the center courtyard so Daughter was happy.  I know that sounds odd being right next to the Gulf but she wanted to swim in the pool for a while at night.

The hotel is behind these trees…

After dinner that night we walked the block back to the pier 60 area. They had buskers performing and selling their items on the pier. What a riot!!!! We saw people juggle fire, escaped from a straight jacket, sing and dance.

Also right at the front of the pier they were playing the movie Ghost Busters on a huge inflatable movie screen on the grass.  There were a lot of people watching the movie and performers, it was a great time.  And best of all it was all free!  We looked at peoples crafts they were selling and nibbled on some popcorn we bought.

After crashing in the waves all day it was nice to relax and just hang out around the pier area. We walked the beach back to the hotel in the dark. 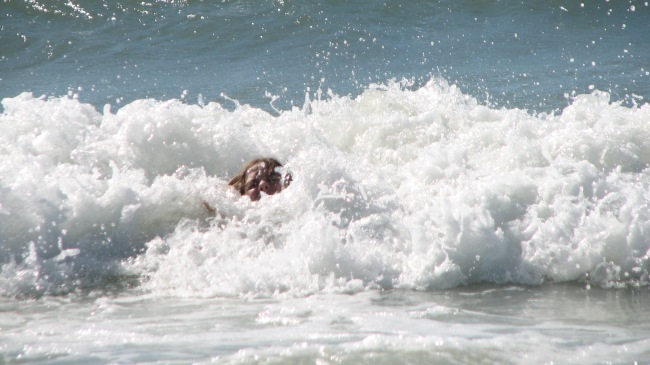